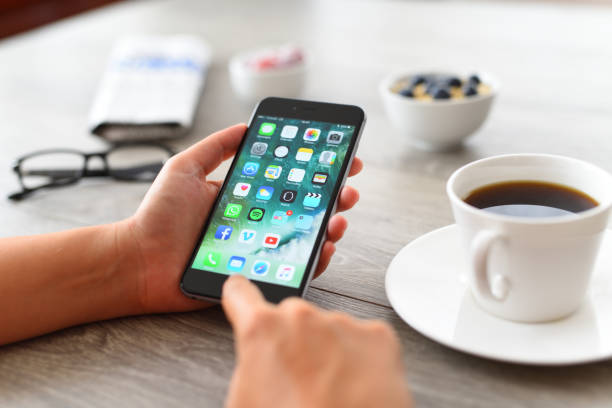 iPhone 13 is Apple's new smartphone, which became available in Russia on September 24. There are
traditionally queues for the new products, and we want to find out what the new gadgets are and
how they differ from previous versions.

Main – two 12MP cameras: wide-angle (f/1.6 aperture) and ultra-wide-angle (f/2.4 aperture);
Front 12 megapixel camera (f/2.2 aperture).
iPhone 13: new design
The iPhone 13's body colour lineup differs from the previous version. Whereas iPhone 12 was
available in six colours, the new version has five: white remains, red is darker, bloodier, blue on the
contrary is lighter. If you look closely at the black model, it appears slightly inky, and a new colour in
the palette is soft pink. The range does not include Salad and Lilac.

iPhone 13: visual features
Also in the new iPhone the power button, volume control, speaker, and some other elements on the
horizontal edge of the smartphone were moved out of the way.

iPhone 13: new cameras
The camera lenses are larger, borrowed from the iPhone 12 Pro Max, and positioned diagonally from
each other to visually distinguish the iPhone 13 from previous models. These changes will not allow
you to try on the new iPhone 12 case: you will have to buy a new one. There is a noticeable 20%
reduction in the 'fringes' – the space for the front camera. The thickness (0.25 mm) and weight (9
grams) of the smartphone have increased, but the difference is hardly noticeable.

The new iPhone operates the new A15 Bionic chip, which allows energy to be consumed more
efficiently, and the battery itself has become larger. With these changes the power capacity has
increased and allows the smartphone to work 1.5 to 2 hours longer than its predecessor. 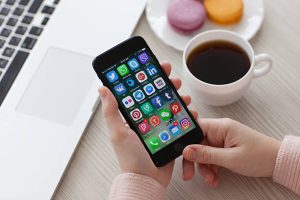 Alushta, Russia – November 19, 2016: A set of programs from famous brands of social networking on the iPhone 7 in woman hands. iPhone 7 Jet Black was created and developed by the Apple inc.

Photo quality has improved. Thanks to the modules from the iPhone 12 Pro Max images are created
with optical image sensor stabilization – photos are almost no 'blurred', and videos are smoother. The
larger pixels capture more light, which significantly improves photo quality. The difference is
especially noticeable in darkly lit photos. Another update is that night mode is less likely to turn on by
itself, and photos are taken automatically.

For fans of beautiful photos, the developers have added photographic styles. They allow you to
adjust the effects of a photo so that they are not applied to the whole photo, certain elements can
remain unchanged.

And for video enthusiasts, there's a 'cinematic effect' mode for capturing video with a shallow depth
of field. This mode automatically reverses the background and foreground as if in a movie: the name
says it all. At 1080p quality, the frame rate is 30fps.

iPhone 13: Storage capacity
Memory capacity has increased markedly. The iPhone 12 had variations with 64GB, 128GB and
256GB respectively. The new version still has capacities of 128GB and 256GB, but the third variation
can use as much as 512GB of memory instead of 64GB.

iPhone 13: screen and display
The brightness level has been increased from 625 cd/m² to 800 cd/m². You can tell the upgrade by
eye. In HDR mode, the display is even brighter at 1200 cd/m², but there's no change from the iPhone
12 in this aspect. You can also use two eSim cards in the iPhone 13. The phone owner can use two
eSim cards or one eSim card along with one physical one.

iPhone 13 pro: screen and display
One of the key strengths of the Pro version is the 120Hz display. It takes a while to get used to it, but
it's well worth it. In order not to strain the battery, the display uses its capabilities at 100% only when
needed. The system automatically decides whether or not to use 120 Hz depending on what is on the
screen at the time. The brightness of the display has also been increased from 800 nits to 1,000 nits,
which is very noticeable in dark rooms.