Home » iPhone 13: what could Apple's new smartphone look like?

In the final stretch before Apple's annual showcase in mid-September, rumours are becoming more
and more widespread thanks to hints from Apple's suppliers. The successors to the iPhone 12 family
could be called iPhone 13 or… iPhone 12S, a clear sign that this flagship model is only evolving at the
margin.

Here is a non-exhaustive summary of the supposed characteristics of the smartphone with the
crooked apple that should be marketed at the end of September. It will be logically declined in 4
formats: iPhone 13 mini, iPhone 13, iPhone 13 Pro and iPhone 13 Pro Max.

Let's start with the exterior of the device. As before each smartphone launch, Android and iOS
included, Asian manufacturers of accessories (shells and protective glass) are activating their
networks in Chinese factories in order to have the most accurate rendering of the final product. The
industrial objective: to create a mould so that their plastic accessories fit perfectly on the new phone.
Most of them are already on sale on the accessory manufacturers' websites.

According to one of them, ESR Gear, the iPhone 13 will have more or less the same contours as its
predecessor. In particular, it will feature the wireless magnetic charging system introduced on the
iPhone 12. Contrary to insistent rumours, this year Apple will not abandon the Lightning port in
favour of 100% wireless charging.

For the screen of the iPhone 13, few changes are to be expected in the dimensions or the finish. The
two main OLED panel manufacturers, Samsung Display and LG Display, are still supplying the 5.5 to
6.7 inch screens. But the big surprise could be the arrival of a 120 Hz screen refresh rate with
increased fluidity for the user. 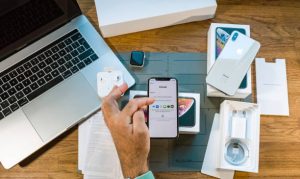 Apple would then be playing a serious and necessary catch-up with its high-end Android competitors
who have made the transition as early as 2020. The Cupertino firm would have removed the main
obstacle to this technology: increased battery consumption and reduced autonomy. This advance
would be accompanied by the arrival of the Always on Display mode, a screen saver that
permanently indicates the time and the status of the battery, according to the specialized site
9to5Mac.

Tim Cook's company could (finally) integrate a fingerprint reader – the Touch ID of the iPhone and its
predecessors – under the touch screen. Many competitors have been doing this for years.

The notch at the top of the screen, which has remained unchanged since the iPhone X, could be
slimmed down but will not disappear on the iPhone 13, which will be optimised for iOS 15.

Some hardware updates
At the back, the camera and its two or three sensors would keep the same shape and the Mini and 13
versions could well benefit from the photo innovations that Apple had last year reserved for the Pro
and Max versions.

Inside, the powerful A14 Bionic processor should logically be updated to the A15 Bionic, which will
still be engraved by Taiwanese company TSMC. More surprisingly, the new iPhone Max and Pro could
provide their owners with 1TB of storage space, whereas they have been limited to a comfortable
512GB until now. Like the iPhone 12 range, the device will be compatible with 5G networks.

Without proposing a real revolution, Apple should also maintain its prices and its marketing policy.
The first answers on the iPhone should come within two weeks. Overtaken in global sales by Chinese
manufacturer Xiaomi, Apple will rely on its new line-up to regain the ascendancy.